This morning started early, we rose before the sun pulled up the anchor and laid a course for the Poor Knights Islands.

The wind was in the south and strengthened as we got further from the coast, the swell was up and its fair to say the ship was rather bouncy. Te Oranga, Helena, Emma, Cooper and Willow braved the cold breeze and headed out onto the bowsprit. They got a few good dunking’s but came aft for breakfast with big grins!

Some of the team felt a bit crook with the swells that were rolling through and as it became apparent that we may not find sufficient shelter at the “Knights” to really enjoy them, we made the call to swing around towards Tutukaka some miles further along the coast.

A few hours later we pulled into the harbour to the relief of many, a solid lunch was enjoyed by all.

We headed ashore for a walk out to the lighthouse were we took in the stunning view and watched the local search and rescue helicopter making practise runs dropping people into the swell outside the harbour!!!

On return to the ship Cooper and Anika completed their Tucker challenges, Something Anika said on the first day “I won’t do!!!”

Now were enjoying a dinner of Crayfish! 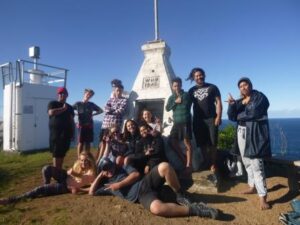