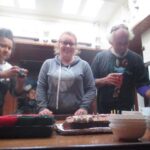 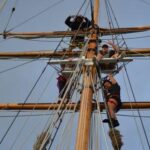 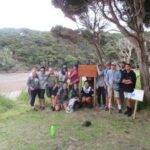 Kia ora from the Good Ship R.Tucker Thompson, whew what a day we have had out here. Dawn to dusk, activity to exhaustion, we almost run ourselves out.

Swimming as the sun breaks, birthday girl Emma was first in, shower in the shine, duties and breakfast, then into Wayne’s classroom for fishing regulations, biosecurity and knots, while Pania, Alex and Tim made the sandwiches for the big hike over Urupukapuka. Just before 1100 we were all out on the pa pulling the invasive weed, wattle. From giants to seedlings nothing escaped the enthusiastic trainees.

Setting off for climbs over remnant pa and views over most of Tai Tokerau whenua. From The Cavalli Islands in the north, way out west the Waima range was easily visible, Motutau all the way back to Cape Brett and Motukokako (Piercy Island). Trainees took turns at the front and encouraged those further back so we all arrived together at Otehei bay for lunch Harry and Manaaki getting an orange each from the wool shed orchard.
The treasure of peanut slabs soon uncovered and devoured all were keen to head back to Paradise for a game of bat down, Aston, Rawiri, Sama, Lawrence and Te Uira traded balls as the soccer ball flew across the pitch while Calais, Taz and Shayla and April configured a sand castle mermaid of which Emma was the centrepiece.

Next trip was out to the ship, hot water on, icing made, by the time the second boatload arrived preparations for the birthday cake were well underway. Hot chocolates, candles out and soon the roasting dish cake was gone.
Going aloft was the next challenge with Harry, Calais, Lawrence, April, Te Uira and Emma all conquering going aloft.

Now the music echoes through the ship, stories and laughter as dinner smells tempts us all.
Crayfish mussels and fresh fish, yummy