Arrrrr the day before…. the second to last swim……. everyone is in rythm, the decks are so well scrubbed, below decks is sooo clean, the brass is mirror like, the sails almost hoist themselves, the laughter is all over the ship, the rain arrived  no deterrent, just accepted.
It was howling this morning in Deep Water Cove, rushing down the gulley and across the decks,the shower was had on knees to get the maximum benefit. Chores and breakfast complete, into the classroom for the last pages of the workbook and some revision questions before the quiz and final knot test and some rewards, the stashed peanut slab or moro bar option. Still raining, Captain on another batch of bread and Wayne on his special soup had all of us ready for sea. Then what! Wind change, arrr the best laid plans, out into a left over sea, wet weather gear and harnesses on the bowsprit with whoops and yahoos. Across the outside of the bay, the previous days passage planning by the trainees went to plan minus the anticipated wind direction. The intended anchorage was still acceptable and as soon as the anchor was laid the biscuit brigade were on duty with a batch of Afghans in and out before the pork roast began.
The last night is skit night for the crews entertainment followed by a real treat of a movie with popcorn!!!! The week has challenged the trainees and they have come through with flying colours, even with not much wind. 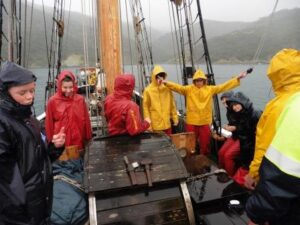