Busy was our day after a gorgeous, clear night spent in Mahinepua, gently rocked to sleep by the lazy swell rolling in.
Hunter led the mineral spa jump off the side this morning, followed by the rest who weren’t quite brave enough to be the first one in the water. Well done!
Duties, breakfast and a tidy up of our living spaces, we broke into our watches, while Gabe and Nicholas scrambled aloft to lose the lower top sail, and the rest of the gang hoisted sails and raised the anchor, all the while, the breeze picking up steadily.
Once underway, Maioha, Toa, Cody, Nicholas, Gabe and Dan braved the elements, and crawled out onto the bowsprit to ride the waves into the Bay of Islands!
As the good ship rounded Nine Pin, the wind was pumping and we aimed right for our secret passage into Homestead, where we were greeted by dolphins! What a treat for those out the front.
Working as a team, all the boys quickly struck (took in) the headsails, followed by the fore and the main, when we glided into calmer waters and dropped the pick. Ahhh….peaceful…no time to dally! A souperb lunch was brought up on deck, where it was quickly demolished and everyone lazing in the warm sun. No rest for the wicked! Dishes! Followed by a well-earned leg stretch loop hike around the beautiful Moturua where we hiked to the army barracks, and made our mark in a geo-cache stashed at the top of the hill.
On the way back to the dinghy, Hunter, Cody and Tim all took a quiet moment to appreciate the different bird life that showed up before them. Tieke, Eastern Rosella, Yellowhead, Grey Warbler, Tui, Fantail and a Robin, that showed up, right as they were leaving. Quite the list checked off!
With a quick swim had by all after returning to the ship, we are all nicely settled into a game of cards, guitar playing and general chit chat around the table. Dinner smells amazing.
Pomarie 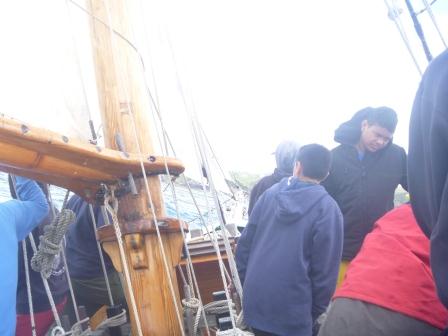 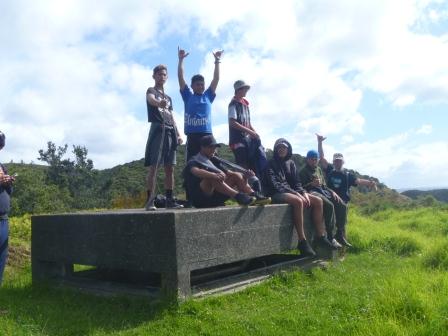