Good Evening!
Looks like the trainees have survived their first day on our voyage up the coast from Whangarei Harbour to Opua in the Bay of Islands. We left family and friends on the wharf in Marsden Cove and headed out into the Harbour. All on board were introduced to each other, the places of things on the ship and what to do in an emergency. Then it was time for lunch; quite a lunch time view heading down the harbour past majestic hills like Mt Mania and large ships in the port.
We anchored in Smugglers Cove for an hour, sheltered from the increasing wind. During the time, trainees learned the lines (ropes) and how to set sails and also how to climb the rigging safely. Then we raised the anchor and set sail under a reefed mainsail (made smaller), fore sail, and inner jib. Yeeeeeehaaaa!!!! It was windy!! The radio said 35 knots gusting 45 knots!
We sailed for an hour but struggling to hold course and with increasing wind strength the captain ordered the sails be struck (brought down). All hands were busy bringing down sail and securing it. The remainder of the way was made under motor. A few trainees had a go taking the wheel, helming the ship. Others climbed high up the mast. Though later most went below decks, to escape the chill and occasional rain.
By 1730hrs we had entered Tutukaka Habour where we spend the night at anchor. The sunset was beautiful. Now dinner has just been finished. Dishes are being done. The guitar is being played. We are warm inside but it is super, cold outside! Lots still to learn, much to see and many good meals to be eaten over the next week. We’ll keep you posted.
-Skip 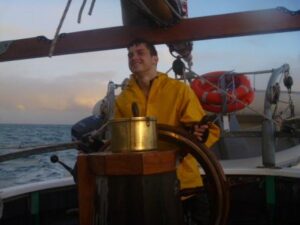 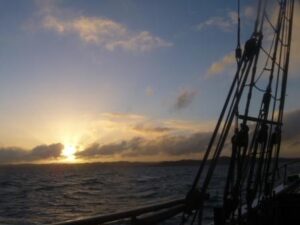