BLOG written by our Trainees

From behind the Te Pahi Islands, the sun decided to grace us with its presence, casting its glory upon our Trainees. It remained so for the rest of the day, thankfully keeping up its persona from yesterday. Although it may have been sunny, the water was anything but cosy for our morning swim, but the trainees did what they had to do, sliding into the water in record time.
The crew stepped back after breakfast, which in itself was notoriously delicious, (merci beaucoup and thanks, Alex) leaving the trainees to organise then set the main and foresails, which was completed successfully, with no doubt in their minds. After setting the sails, with the encouraging push of the winds hands behind us, we headed off on a six mile journey back to Paradise Bay, where for the first time we had all sails set!

Pania and Alex planned and launched their own escapade to photograph the R. Tucker and Trainees as they lounged on deck, underneath the full sails. Also they had to go again for a JOB: Jandals Over Board, clap clap Leilani! Once reaching Paradise Bay, we planned to head to shore, but not before wishing our birthday girl, Leilani, a happy day with some divine cake! Thank you Pania!

As we lowered the anchor, and dingy, Heath, Wiremu and Jacob decided to take Little Tuck for a row! Obviously a swim at the end. Making all the way to shore, where they lounged on their own. Meanwhile, Ciara and Leilani showed their own bout of courage by swimming to shore, only to later be picked up half-way, still a long way out, by Pania in the dingy. Once all ashore, the Trainees enjoyed an great hour of leisure on the beach, heading up the hill to watch the sunset.
Returning to the boat, content, warm and happy, the Trainees returned to relaxing, playing cards and basking in the glory of day lived to the full.
Beautiful dinner, once again.
We’re looking forward to an even grander day tomorrow, as our last full day together as a whanau, it’s going to be lived to the fullest.
By Trent and Amelia (^-^) 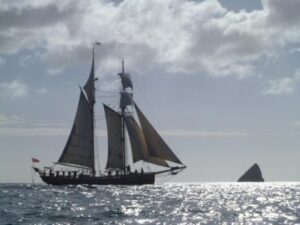 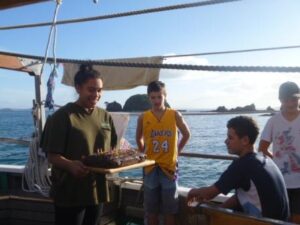 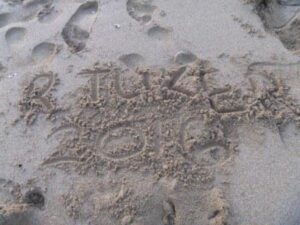