What an amazing day 2!
The morning came in overcast with cool temperatures. That didn’t stop our trainees from the ritual morning swim though! Both Jordan’s were the first to jump in and test the waters.
Slowly but surely we started organizing ourselves in to below deck and above deck duties and had them all done in no time. Jordan G led the above deck teams, and Amy led below decks.
Once breakfast was had, crew member Pania with the help of Amy, Ocean and Corrina, prepared sandwiches for the bush walk that we were getting ready to do on Urupukapuka. Sammies packed, fruit and lots of water, we set off from Paradise Bay towards Urupukapuka Bay via the Cliff Pa sites and Kumara pits. We cleared a small portion of wattle from a Pa site as part of the biosecurity lesson, with everyone joining in with gusto!
Moving on, we made Urupukapuka Bay in record time. With a well earned picnic and cool drink of water, we relaxed, played rugby and watched DoC Rangers in their natural habitat, with a brief visit from Cody the rat dog!
4 hours later, 3 more lessons completed, we were back aboard the good ship with all sails set, headed towards the sunset for a much anticipated sail.
We are now in Awaawaroa Bay, with Harmony, Jordan G and Dante stowing headsails and topsails, under the ever watchful eyes of the crew. *sigh* perfect way to end an awesome day…. 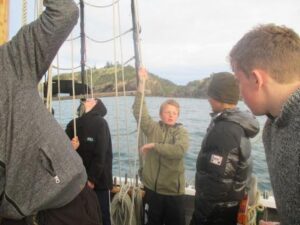