Left Opua in brisk winds, with a new and enthusiastic crew.
Everyone was shy at first, but by the time we had motored across to Whale Bay, they all became fast friends.
On the way, we did a safety orientation of climbing the rig, and donning a lifejacket. Bunks were squared away, and we were soon anchored in a SW’rly wind.
Amazing mac ‘n’ cheese lunch had by all, followed by an abandon ship drill.
Many laughs were had during the “Trust” game, where trainees were led blindfolded around the deck by team members who then had to navigate their friends out onto the bowsprit, and back to the binnacle. Everyone survived!!!!!
Due to weather conditions, we decided to stay in Whale Bay and went for our first dive of the trip!!! Zara, Billy and Teri-Faye were all keen for a swim and a look at what the divers were doing, and then returned to the ship with crew member Geri.
Phillip, Paihere and Nathan went with crew member Nate and Skipper Steve on a cray hunting expedition, producing 1 cray and some kina!
All the while on board, Raven, Alana, Zayea, Kuao, Jacob and Quin helped crew member Pania rig up the washing lines for the soggy crew’s return. Only showing them once, they all took off to rig the rest of the lines no problem!
After a few lessons, and a hearty meal, all the trainees are chilling in the Saloon, chatting like they’ve known each other for ages!! 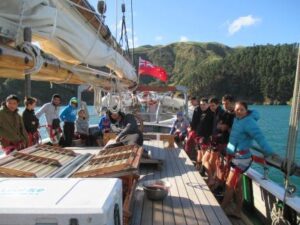