Good evening from the good ship R Tucker Thompson to all you landlubbers.

Once all our trainees arrived, we motored away from Opua under a sunny sky and pointed our bow for Roberton Island. While under way, we played the name game to get to know each other. The trainees then got a tour of the boat, with a brief explanation on what life aboard was going to be like. Soon the girls were climbing the rigging, led by Lyla, Rewakaa, and Waitaha, they just kept climbing up and up. Everyone eventually gave it a try, either testing their confidence to varying heights up the shrouds or out onto the bowsprit.

Once we dropped the hook, we ate some lunch and practiced a few drills, like the process of abandoning ship. The trainees then went over line handling with the crew. It looks like we have some sailors in the making! The trust game followed. Two trainees guided their blindfolded teammate from the helm, all the way out to the end of the bowsprit and back. Everyone took their turn, and everyone made it back in one piece!

We then raised anchor and headed to Paroa Bay for the night. That was the perfect time to practice our man overboard drill – Thor did a great job accurately directing Captain Steve to Wilson (our volunteer man overboard/volleyball). In no time at all, we were anchored for the night, dinner was served and dishes were done. As the evening draws to a close, there is lively chatter and laughter coming from the saloon while the trainees play cards and get to know each other. A good first day. 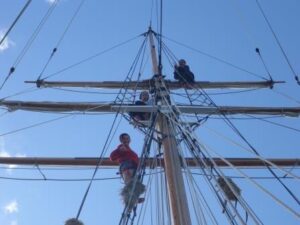