Day 6: Back in the Bay of Islands

Today is our last full day out at sea. We arrived in Whale Bay yesterday evening under starry skies, and just in time for dinner. We awoke in the morning, to another sunny day. The weather has been nothing but fabulous on this voyage!

Nate made his famous Sowter’s Pikelets for breakfast to the great enjoyment of all. Armed with good intentions, a group of trainees headed out to a nearby rocky outcrop to collect mussels. The trainees came back aboard with a big bucket of mussels!

While that was happening, Shaquinah proved himself a great coach by calmly talking Patrick and Thor up the rigging and out to the end of the yard arm. Both were nervous but pushed through their fear and earned their Turk’s head anklets. Thor was so pleased, he stayed aloft with Shaquinah to encourage Regan, who also earned his Turk’s head anklet. When William returned from the dive, he also succeeded in reaching the end of the yard arm. Way to go guys!

Then it was time to head to Paihia and bid William goodbye – he had another commitment and couldn’t stay until tomorrow. After that, the rest of the trainees planned their final activities – which included fishing by Oturori Rock and anchoring in Paroa Bay for the night. 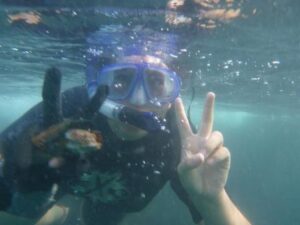 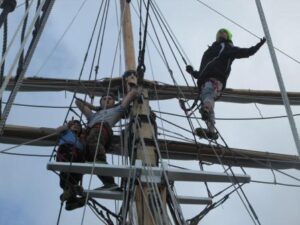