Day 6: The Kids Take Over the Ship

We woke up to a chilly morning, some clouds, a touch of sun and, of course, a dip in “refreshing” water! On the last full day aboard, the trainees get to plan the activities and what role everyone will play.

Once the day was planned, a few of the trainees headed for a dive with Captain “Stevie Wonder” and Nate. The rest of the crew stayed aboard, singing songs and laughing at silly jokes. Callum and Cian helped Kyra make 12 pizzas for lunch. Thanks guys!

Little Tuck (the rowing dinghy) was lowered into the water and we discovered we had more than a few competitive spirits aboard – teams of 2 raced around the R Tucker Thompson and tried to beat each others’ times by paddling as quickly as possible. There was much discussions about rule interpretation (that the crew found rather amusing) and everyone enjoyed a treat for their efforts afterward. Lunch ensued, and then the trainees took on their respective role. Captain Tegan was on fire and she had the boat shipshape in no time. Bex was our helmswoman. Shania and Taysia raised the anchor and catted it, and along with Ropi, Katia, and Trae (among others), they raised the sails allowing the ship to do what she does best: sail!

We dropped anchor next to Roberton Island and it was time to go stretch our legs ashore – most of the trainees headed up to the view point and wandered around for some time. That was followed by a mean (this means cool) game of touch that got everyone warmed up as the temperature dipped into late afternoon. The competition was fierce! It is important to note that Callum got a “hat trick”. Way to go!

Then it was time to weigh anchor once more and head to Paroa Bay for the night. This time Orca was captain, and a fine job he did. Sam was at the helm. Callum, Shania and Taysia raised the anchor with such enthusiasm that Nate only had to watch. In no time, we were on the move. Fishing is up next. There is a roast in the oven and the cabin is filled with lively chatter. The plan is to enjoy our last evening to the fullest. See you all tomorrow! 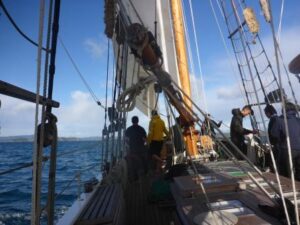 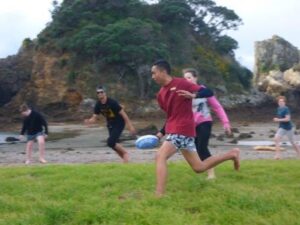