Day Four: It Was Wet

Our fourth day began a bit on the damp side. The trainees braved their morning swim and tucked into a hearty breakfast of porridge and toast after morning duties. Everyone donned their wet weather gear, and readied themselves to head out. Rain or shine, it was time to let the good ship do what she does best: sail!

It was wet, it was bumpy, and there were a few loud yelps from those stationed on the bowsprit as the boat plowed through the waves. The gang did a haka as Dolphin Seeker came by with a load of very appreciative tourists. We then motor-sailed out to Nine Pin Island and tacked back toward Mangahawea Bay, on Moturua Island. As we neared the island, the skies finally took a break, stomachs settled down, and a lovely anchorage awaited. Even the sun managed to peek through the clouds.

As soon as we anchored, a group of keen souls donned their wetsuits and went for a dive, while the rest remained aboard. After all that time on the water, all the trainees were enthusiastic about stretching their legs on Moturua Island. Captain Tim dropped everyone off, and as the gang tramped over to the next bay, he and Wayne sailed the Tucker over to meet the happy trampers. Back aboard, we motored our way back to Omakiwi Cove for some fishing and a relaxing evening in the cozy cabin. It’s almost time for dinner, we bid you good night. 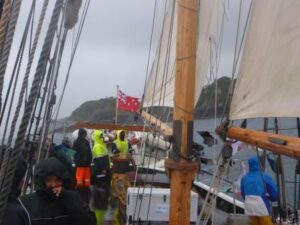