The day came in beautiful for our morning mineral spa, so we decided to head around the Cape as we’re ending our voyage in Marsden Cove. With breakfast and dishes out of the way, we weighed anchor and hoisted the mainsail and foresail. Alas, there was no wind, but they were perfect shade covers as the sun just burned brighter and hotter the further out we went.
As we passed Deep Water Cove, the swell started up which saw Darryl, Athol, Teqwin, Tiaho and Latham riding the bowsprit like a rollercoaster, while Hamish, Cassidy and Tash braved climbing aloft and sitting up on the cross trees having the time of their lives. Loads of laughter and singing was heard all around the ship. Unfortunately the swell won out after a few hours and everyone was now laying willy nilly all over the deck feeling a wee bit queasy. Life story!
Anchored in the sheltered Whangaruru Harbour, we ate a hearty lunch then went ashore to stretch our legs, feel the good muddy earth between our toes, and to track some Kiwi!
No such luck on the Kiwi front (oh well) but a wicked walk along the top and coast, made the day go by and had us appreciating what a beautiful part of the country we live in.
Once back on board, we hoisted the sails again as the breeze had picked up and sailed to our final anchorage for the night, with several tacking manoeuvres executed by the trainees by themselves after being talked through it just once! Well done everyone!
Now we’re settling in to some more book work before dinner and a much needed good night’s sleep. 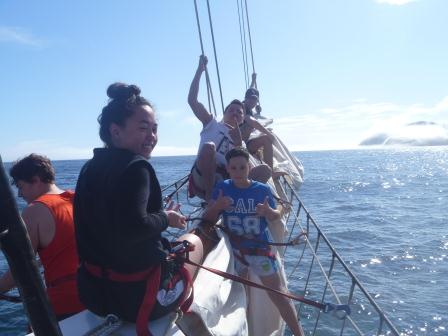