Opononi take out the Challenge!

It was a voyage of rain, sun, wind and swell and, for the very first time ever, an all girls voyage! Yes, this year’s Taitokerau Challenge was another amazing event for all who took part.

The girls were fiercely competitive but at the same time worked together as a team on board to achieve their goals. Captain Tim Grant noted that the girls considered they were all winners, having won the right to compete in the first place. He highlighted that during the voyage all but one of the participants had earned their “anklets of honour” a Turks Head anklet awarded for those with courage to go out to the far end of the yards. On the final day, with plenty of support and encouragement from the rest of the group, the last contestant met this challenge too and earned their Turks Head.

The competition was tight, with only a few points all along separating the teams. Kaitaia set the pace with their winning entry to the competition; the first fish caught went to Pompallier, the phonetic alphabet competition was won by Opononi. Huanui and Dargaville tied for best brass cleaning and the most rubbish collected on the beach clean up went to Bay of Islands College. But it was on the final quiz on the last night that Opononi streaked ahead, answering every single question correctly and pipping Bay of Islands College to the post.

When the ship arrived at Marsden Cove Marina, it was Mary Dickson from Northpower who presented the trophy to Mihiora Waipouri and Fern Donovon of Opononi Area School, the winning team from the Far North.

Outstanding work girls, the Opononi community can be proud of you! And our thanks go to Northpower and Top Energy for their support of this challenge which develops our young people of Taitokerau. 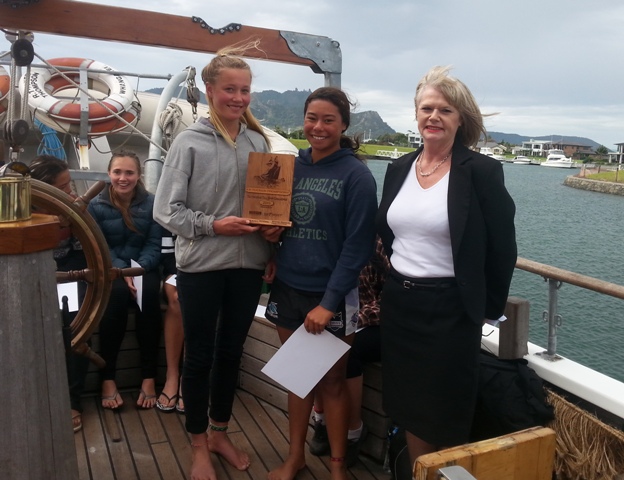