What a day. Up before the dawn and laying anchor after dusk but on our last full day on the Tucker who would have it any other way!
We awakened this morning early before the sunrise and weighed anchor in the dark. Hot chocolates for everyone as we motored out to sea from Mimiwhangata and towards the Poor Knights. The sunrise warmed our faces and sweet french toast for breakfast warmed our stomachs. It took a few hours to reach the island reserves but it was flat seas all the way and some people on deck even saw a baby dolphin with it’s family of Common Dolphins.
At the knights we went for a snorkel and saw so many fish! Snapper and Blue Mao Mao and colorful Pig Fish. After some time in the water we got back on the boat and moved to a new location. Along the way Tim took us really close to the islands and pinnacles so that we could see everything! Then everyone (except the captain of course) got into the small boat and Nate took us on a tour through some beautiful archways. We saw a seal on the rocks. We went through three different archways some huge and others small. The best bit was the last stop where we went into a cave with the boat but once we got inside we found we could see the sky through some holes in the ceiling of the cave. Then, still in the cave, Nate, Rob, Deanne, Bailey and some others went for a cave swim.
Back on the ship, we had lunch which was the snapper caught yesterday and some yummy quiches made by Alex. After lunch, Emma took the opportunity to climb up to touch the yard arm while we were still in calm waters and she did it! Then Rob, Wilson, and Micheal undid the ties on the topsail in preparation for our journey back to the mainland.
All together the trainees set the sails, five in total and a reef in the mainsail, with the skills they had learned in just six days. The was a good strong breeze for sailing to Whangarei and we definitely didn’t need the engine speeding along at 6 knots for most of the way. In the afternoon sun Sarianna tied turkshead anklets for trainees who had successfully reached the end of the yard arm. There was a bit of rock and roll but everyone handled it fine and many took the helm for long periods especially Nakita whom did a stunningly confident job.
As the sun set we were reaching Bream Head and all sails were taken in. Anchored finally after dark now in Smugglers Cove at the entrance to Whangarei Harbour. Nate has cooked a wonderful big pork roast for our final dinner and the is a thunderstorm looming on the horizon 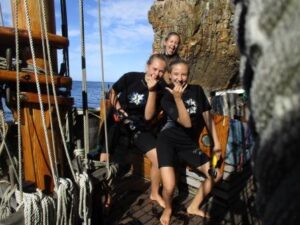 being watched with intensity. Tomorrow everyone will return to their families and normal life again but for now the trainees are enjoying the last of the voyage together with new friends.