Here is a blog that was written by Skipper Tim, from Day 2. We thought it went out, but then we also discovered we were having tech difficulties. Enjoy!

Ahoy from the Good Ship R Tucker Thompson. We spent the night under the shadow of the Tsunami Advisory notice from the earthquake in Chile. A radio watch was maintained through the evening with no cause for alarm or necessary action taken to avoid any wave or tidal surge.

We awoke to an overcast sky and a group of hesitant trainees as we went for our morning swim, then the rain set in, which sent us to class. An introduction to the workbook activities before we ventured out of Te Hue to clearing skies. While considering the options of what the day held we were joined by some dolphins and enjoyed the antics they performed for us. Then we off to Motuarohia for an island visit including a walk, snorkeling in the lagoon and some rock climbing before returning to the ship for lunch. As the skies continued to clear and the breeze increased we hoisted sails for the first time. A pleasant voyage across the bay with youth climbing aloft and out on the bowsprit in a building sea, outside the islands then through Albert Passage and into Urupukakpuka bay . Ashore to run off some energy with a game of touch to lots of laughter and giggles. Back on board for a swim in the last of the sun before a heavy shower sent all below to await dinner . 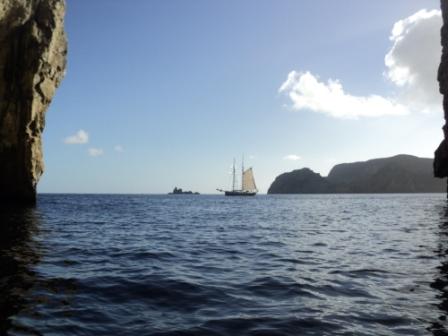