Kiaora Whanau
Our first morning was warm and sunny, compared to last night’s wet and cloudy evening.
Mataora couldn’t wait to be the first in the water and everyone followed behind fuelled with adrenaline and excitement, Jay enjoyed having the rope swing to himself. It took a while to persuade a lot of the trainees to come out of the water to begin their morning duties as they were having so much fun!
The trainees took to their tasks very well and participated in things like scrubbing the decks, sweeping and mopping the sole (floor) throughout the Tucker, cleaning the head (bathroom) and brassing up on deck (which is where we had a lot of spillings of the brasso and the trainees then learned how important it was to clean up after themselves).
For breakfast we had the options of left overs from last night’s dinner (cottage pie), porridge, fruit, and toast.
From there we got into the rostered groups and cleaned up while others tidied their bunks.
We then sat down and completed some of the work book which included navigation, the lines (what they are used for and why we use them) and also what their goals are for the week.
It was then time to set sail which all the trainees took part in. We introduced the five main knots to veering degrees of success.
We anchored at Robertson’s Island after a long morning of sailing throughout the Bay of Islands hoping the kaimoana would be plentiful in the area. Because we had cooked so much the night before, cottage pie was yet again on the menu for lunch. After lunch, everyone wanted to go diving/ snorkeling and some of us walked the track to the Robertson look out enjoying a 360 view of the Bay of Islands. We gathered some crayfish, a beautiful silver drummer, and a handful of kina.
When we arrived back Lena Huia, Toby, Mataora, Elle, Larissa and Amy all completed the Tucker challenge which is where they climb out to the very end of the lower topsail yard. So proud of them! So you have an idea of how busy we have been, we are now at our overnight anchorage at Opunga where we introduced the concept of 30 minutes silence by all on board. As a first attempt we agreed to trial 15 minutes but the 20 minutes past and we easily got to the challenge. Yahoo, we were all elated at the end and what we experienced during the time. Bring on tomorrow. 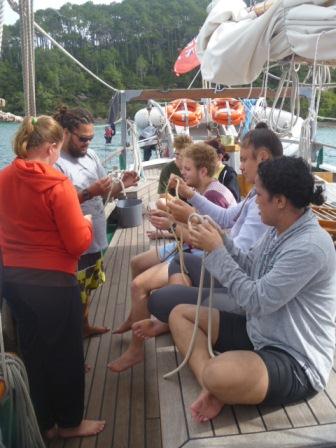