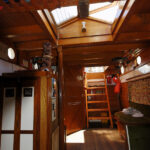 With her upswept bow and full sails the R Tucker Thompson plowing boldly through the seas looks for all the world like she has just sailed in from the nineteenth century.

She is a Tall Ship. The romantic definition of Tall Ship: “A sailing ship whose sails can be seen over the horizon before you see the ship”. As she draws near, her wind filled sails creates a feeling of majesty, awe and wonderment.

The Tucker is in fact a product of the last quarter of the twentieth century. She was built in a land noted for tough uncompromising sailors. A land with a tradition of innovation, where the population has an economy based on what the soil can produce. Excellent craftsmen with tools and material at hand built the Tucker. Many times they were forced to use the building techniques of earlier centuries. The final product is a safe, wonderful, and beautiful ship steeped, in rugged tradition.

The Tucker is built to sail. She is a gaff rigged, square tops’l schooner. Gaff rigged means that her mainsail has four sides; square tops’l refers to the two square topsails. Schooner, in this case, means that of her two masts, the forward mast is shorter than the aft. She was designed according to the traditions of a North American Halibut schooner.

To build her in modern times, required resourcefulness of her builders. For example, they needed over one hundred pulleys but couldn’t afford to buy them. So they manufactured their own out of wood using one hundred year old designs. For the connections of the spar to the mast they used a wishbone with leather gaskets, not the universal joints of modern sailing ships. To adjust tension to the rigging, a double pulley device called ‘dead eyes’ served instead of turnbuckles. The deck is sealed with pitch (tar), the same material used by the fisherman Apostle, Peter. She has a hull of steel making her very strong and dry below. Her lofty rig is of varnished Oregon spars. The soft feeling weathered gray deck is of kwila, as are her protective bulwarks. She has enough brass to keep the trainees busy and protect the traditions of the 1800’s. Her seagoing compliment is fifteen, eleven single bunks and two cabins accommodating four more. The head has a shower and basin. The dining salon, supported by a galley, is capable of feeding the crew of fifteen.

Few amenities not available in the mid 19th century were installed on the Tucker. A sailor from 1890 would not feel out of place on her deck. The compromises to tradition are a diesel to push her along in times of little or no wind, modern communication equipment, global positioning indicators, modern life rafts and safety devices, depth finders and radar. However, despite modern devices, the sailors still have to pull lines, raise and lower sails, and constantly balance the sails and helm with the wind. Foul weather has to be faced unprotected, other than personal foul weather gear, much as our earlier ancestors.