Greetings from the good ship to thy land lubbers…… What a gusty day it has been out here in the lovely bay of islands.
We had a good night sleep until about 0500 when winds and rain increased to stormy levels. The crew moved the ship to a better place after the sun rose. Breakfast and cleaning were done underway to our new anchorage and also the weather got a lot nicer on the way. By the time we arrived in Orokawa Bay it was still windy but the rain had stopped and it was sunny. Classes on navigation and knot tying were had. Then the mega swing was introduced and the “pool” was opened for swimming. Craig, Kapatoa, Jaya and Tiahorangi showed everyone how the swing was done while Kea, Summer and Gypsy took the opportunity to shampoo and soap up!
The rest of the day was pretty relaxing. Everyone had a bit of a walk on shore, then back on the ship Tiahorangi, Quinn, Gypsy, when all the way up the mast to the yards. Then the crew Wayne and Alex began making the eagerly awaited “Turkshead” bracelets for those who had accomplished the challenge of touching the yard arm end.
Another swim was had as the sun set and now we await another night of forecasted winds and rain but at least we all had a fun filled day in the sun today!! 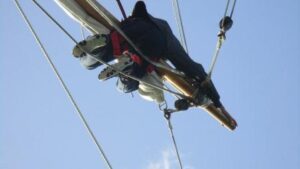