We are again now anchored for the night in Mangonui Harbour after a beautiful and inspirational day. It started in the morning with our usual routine of swimming, cleaning and breakfast but we had big plans. So after breakfast, we left the harbour to anchor near Taipa. It was a stunning morning. We anchored off the beach and went ashore where two vans awaited to take us to Hec Busby. Hec Busby is a master carver and navigator. He took us to his star compass in a field overlooking the ocean. Then taught us a bit about navigating by stars and how, using the sun and ocean swell, a navigator could keep his waka hourua on course. What an honour to learn from such a man!

Then Wiremu showed us around the grounds. A carving school stood with projects in the process of being made and the navigation school still being built. Most exciting was climbing on board one of two waka hourua which had travel across the pacific and back. They were now being re-lashed for future adventures but such stories they held!!!

We were pretty hungry by the time we got back to the ship. So, after the trainees set the jibs and the fore sail (on their own) we had lunch. We sailed back to Mangonui, anchored and Tony joined us to replace Wiremu who had stayed behind in Taipa.

At anchor, some went for a swim while others chatted in the sun. Then Nicholas, Gabriel, Dan, Tom, Toa, Cody, Maioha and Rua completed the Tucker Challenge by climbing all the way up the mast and out to touch the end of the yard. Well done! Hunter played the guitar on deck creating a lovely late afternoon on the ship. 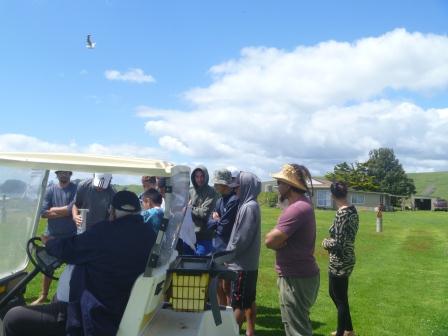 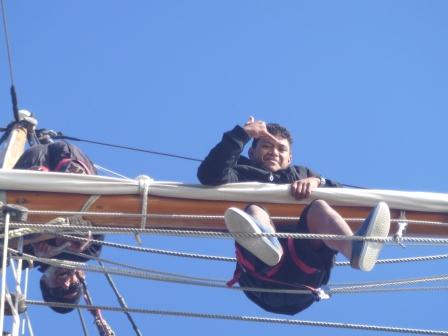