From the Good Ship, R. Tucker Thompson, the last dinner, on the last night of our voyage. What an epic day, from dawn where we found ourselves half way to the Poor Knights, Tawhiti Rahi and Aorangi. The sun rising amongst lightening clouds, the ocean calm but for a leftover south east swell which we climbed over with ease. Hot chocolates were eagerly had on deck as the islands grew higher in the distance. Soon the mainland was misty, left behind us as the chalky cliffs, arches and pinnacles of the Poor Knight’s appeared. Breakfast then dishes and we were there, duties to clean the ship for the day’s activities and warm up for a possible snorkel. The sun never really appeared to colour the sea and bring the underwater world to life, so a massive bomb, swing and dive exhibition replaced it. Wayne and Nate took the lead as Darryl, Latham, Terry, Teqwyn, Cody, Natasha, Kassidy, Hamish, Tiaho were encouraged by Aaron, Levi and Athol scoring each entry from the helming position in true Captain style. Under the vertical cliffs outside of Rikoriko Cave with Poor Knight Lilies flowering overhead, it was a very special morning as we waited for some breeze to take us closer home. On departure a presence of wind and the arrival of the sun we hoisted sail for Bream head, south west in heavy cloud.
Lunch was soon up and the breeze dropped, (go figure), the engine took over and a direct course set for the twenty miles to anchor. Nothing much happened along the way of our voyage for the day, no marine wildlife to mention but for our friendly Mollymawk and two unidentifiable gliding monsters of the petrel family.
Bracelets and anklets were completed as all the trainees chose their colour combinations. Cody had been up the rigging on the way out and Darryl and Hamish climbed as we approached the Heads. The sky inland was black, all the highpoints of maunga taken by descending cloud as we headed into an afternoon thunderstorm. Everyone rushed about claiming clothing, towels, togs, wet suits and raced below before we got hit. We edged past Smugglers Cove into the shipping lanes and nosed around the corner into Urqharts Bay, runabouts soon raised their dive flags as we approached.
Athol, Darryl, Terry , Cody and Latham are sharing the fishing lines between showers and enthusiasm. Below deck the last night roast is well under way and keeping the rest of us warm as games and laughter fill the ship, waiting for the morning.
Po marie 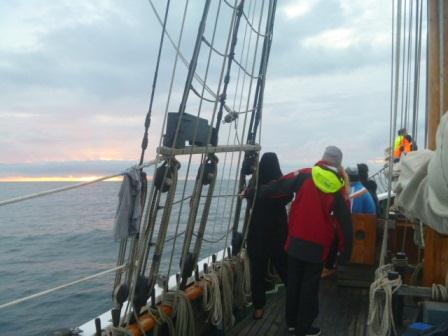