There’s a hole in the rock!!

Ahoy from the good ship! The ship awoke before the sun in Paradise Bay as we slowly made our way towards Motukokako to watch the sunrise over the Cape Brett Peninsula. What a gorgeous way to start the day! The tiny sliver of a moon guided us as we rounded the Poroporo Islands out the channel, with Wayne, handing out hot chocolates.
As the sun burned its way up the sky, Sama, Shyla and Calais rugged up, and donned harnesses to get a better vantage point of the sunrise from the Bowsprit. Aston and Rawiri saw this as a great idea, but lay aloft and sat on the cross trees, pointing out various cliff formations, fishing boats and eventually, the lighthouse.
The trainees were split into Port and Starboard watches and were issued lifejackets upon arrival to Motukokako, where Alex and Wayne took turns in taking the trainees through the hole. Excitement a buzz on the ship once everyone had their turn going through!
Breakfast was had on the way back towards Motuarohia, as we were giving a hand to the caretaker Jim to unstep his mast on his gorgeous little yawl, lunch, bookwork then the afternoon was spent ashore shell collecting, diving, sunbathing and leg stretching up the track.
Now we’re making our way back towards Paradise Bay, where we’ll spend the night and hatch our next plan for tomorrow!!
Pomarie. 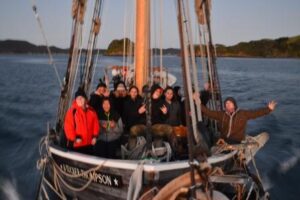