Kia ora ki te whanau, and what a special day for our good ship and our sail trainees! Today was the release of 80 birds, tieke (saddlebacks) and pōpokotea (whiteheads) on islands in the Bay. Our sail trainees had been asked by Project Islandsong  to be part of the release and our good ship to transport from Te Rawhiti Marae out to Homestead Bay at Moturua.

We started with our early morning swim and chores before heading in to Te Tawa Bay in front of Rawhiti Marae. As it was very shallow there, with low tide as well, we had to anchor some way off. Wayne, Nate and Kyra took a group of our sail trainees in for the Pōwhiri, while the rest went swimming off the ship with Captain Tim keeping an eye on them. Time and tide waited for no man so we had to leave before the end of the kōrero, then Wayne picked up 2 more boatloads of visitors to head out to Moturua on board.

There was quite a crowd waiting for the release, then in came the helicopter with the birds on board. Isabella, whose tupuna used to live on the island in the old days, was asked to release one box. She, Analiese, Renee and Hana gathered round the box, released the door and out they flew into the bush, chirping away. They were probably very happy with their freedom after the huge journey from Tiritiri Matangi, a couple of days at an aviary and the noisy helicopter! Tumeke!

We then headed back to Rawhiti for a big Hākari or feast, although Captain Tim had kindly cooked us some sausages to keep us warm on the way. The proceedings were finished off in the Whare Nui first, then next door to the Whare Kai for some great food. Big thanks to Vicki for letting us take back some of the leftovers on board as well!!!

There wasn’t much left of the day after that, so with full tummies and much excitement, we headed round the corner to Omakiwi Cove to anchor overnight. 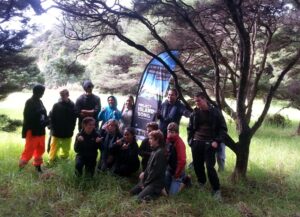 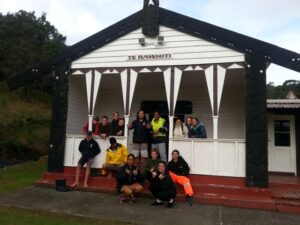