After an action packed evening playing spotlight last night, we moved the good ship under the cover of the stars and milky way, to our sheltered anchorage of Orokawa for the night. While underway, we had an impromptu lesson on stars, planets and constellations as the sky was clear and the ship wasn’t rocking around so much. Buzzing from spotlight, and seeing the stars in a new light, we headed to bed much later than usual, but awoke this morning , slept in, then jumped in the tide to wake ourselves fully and start our day.
The weather forecast told us we were to expect gale force winds, so we decided to stay put and enjoy the sun while it was out. We even jumped in for a second swim!
After a late lunch, we held a much anticipated Tucker Olympics where the trainees were divided into their Port and Starboard watches to await the first competition!
First up! The blindfold challenge! Divided again into pairs, one person was lead from stern to bow, over the bowsprit and back again, with cheers, hoots and hollers as each pair stumbled around. Lots of laughs and everyone did very well. First challenge win goes to Hamish, Eli, Kawiti, Rufaro, Tahua and Jacob. Port watch rules!!
Next up was the Knot tying challenge where you had to tie a certain knot correctly and quickly. It was a “tie” game all the way through, but Billy, Brittney, Te Moerehu, Monique, Tenika and Thomas came out on top! Starboard watch rocks!
Half time! During a fruit and drink break, Little Tuc was launched and readied for a time challenge as the trainees were placed into pairs, keen to try their hands at rowing around the ship the fastest.
Port watch had the fastest time collectively, but Thomas and Te Moerehu made the fastest time around the ship in 1 minute 28 seconds! Wow!
With a wind down challenge next, we split into our watches once more, and came up with a shanty. 20 minutes later we held a concert on deck where both watches performed, but it was difficult to choose just one. Tie.
With our final challenge being held in the salon right now, with the delicious smell of tonight’s roast wafting through the ship, it’s going to be a nail biter to see who takes out the Tucker Olympics 2016.
Find out tomorrow!! 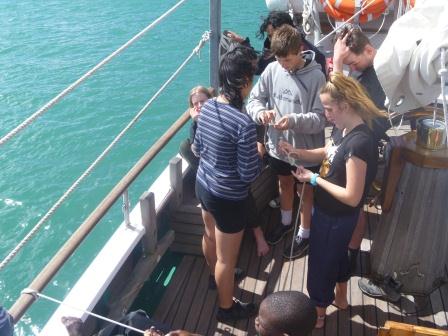