Finishing from yesterday after we resurrected our day we put out the Tucker Challenge to go aloft up to the yards and extend themselves. With a chilly offshore the R. Tucker Thompson hung head to wind, the swell rolling in added a little interest to the achievement. One after the other Vee, Megan, Dolf, Bella, Hemana, Callum, Jamie and Cody climbed aloft, stepped out and stretched to touch the end of the yard then landed safely back on deck to the support from all. While this was going on we experienced some local hospitality with a couple of fishermen approaching us with a feed of just caught snapper and gurnard, yes! After exchanging with the crew a couple of Tucker beanies and a Tuia 250 Tucker poster Max filleted the fish. Ethan was already in the galley with a big fat pork roast in the oven filling the ship with aroma and warmth we settled in for some class work, introducing the manual and conversations of ship life and laughs. After dinner we talked about the next day plan, watch keeping roster, timing of events and activities to keep us occupied on the way south. Restful at anchor, the tossing about from the previous night a distant memory, the cards and guitars fell silent as we snuggled down for a peaceful night in anticipation for the morning.

Dawn, we raised anchor and headed out past the Spirit of New Zealand just appearing on deck with towels around their necks, cargo net slung over the side for the swimmers to clamber back on board, brrrrrrr, a hearty wave and cheers as we snuck out to see what the day held for us. Breakfast started with cereal and fruit on deck or round the table as Tim began the task of preparing the fresh fish, coated in flour and panfried in butter, warm toast, fried up left over pork, spread out in the saloon, consumed eagerly by all as the first watch took charge of the ship. Sails hoisted, passing Matakaoa, the entrance to Hicks bay and on to the very eastern tip, Whangaokeno before altering course south as lunch boils and steams, bakes and sizzles, the conversation as continuous as the sea miles under our keel. The excitement builds…..

Then becalmed for breeze the engine keeps our progress up to our ETA. The call went out for a swim, the engine taken out of gear. Stationary Callum, Hamana, Dolf and Max plunged in off the ship swimming back to the ladder. The swing from the course yard ran out for the keen ones, deck shower to rejuvenate the chilled bodies as the forecast breeze arrived. Topsails let loose as we quickened downwind, bathed in sunshine we bent to the task of learning our waiata. Cody supplying the rhythm, Wayne keeping beat on the disc drum, lines rehearsed,  learn’t and background of the lyrics explained. Moulding the crew with recruits. Then we set the missing sails, flying top gaff popped above the main, charging ahead, chasing down HMB Endeavour. Chynna begins on dinner as the guitar free jams around the helm, crew about their tasks. Kim keeping track of progress, Max in the head sorting running repairs, Wayne and Ethan on deck sail trimming as we pass headlands and bays identified by Wayne now well in his turangawaewae. We have all the ingredients of exploration, recognition to ancestors ashore and those we follow the wake of. Apopo we meet. 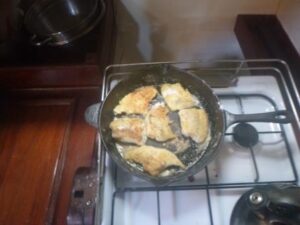 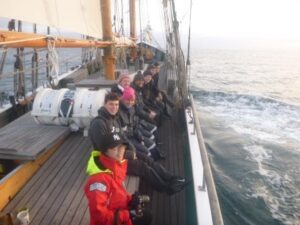