Land ho!!! Day 4 is nearly over here on Voyage 1807. We are anchored up in the shelter of Orokawa Bay after quite an exciting day.

Our morning swim was a little less pleasant this morning with a shower of rain coming over just as we entered the water. Lucky the sun came out in time to do morning duties. Then a breakfast which included fried fish and crayfish caught yesterday by crew member Wayne. After breakfast, sails were set and we set out to go 3 nm off shore where we could get rid of our food scraps over board. As we set out Erikah and Taedyn went aloft; Jon, Keyah, and Mahina went out on the bow sprit to surf the waves and Tomas took the Helm. Clouds grew dark and grey behind us as we headed further out sea. The 1 – 2 meter swell began to make some trainees feel a bit seasick. Then just as we had begun to turn back towards the shelter of the islands, the front hit us. The land disappeared as heavy rain feel and the wind and waves picked up. It was all hands on deck to lower and stow sail. Quickly taken care of, we surfed the swell back into the bay, entering through Albert Channel near Rawhiti. The sun cam e out again as we made our way to Orokawa Bay to anchor with Eden at the Helm.

All calm again, a bet very wet, we hung everything out to dry in the sun. A late lunch was enjoyed by everyone (even the ones who had previously felt sea sick) followed by 30 mins of silence to rest and reflect. After some quiet time, the Captain brought all the trainees together to prepare for tomorrow when they will lead a daysail of 12 other trainees. They elected who would do what, with Wiremu and Ngaroma taking overall leadership and Walli and Manaakitia filling the other most important role – the cooks! Some last minute practice raising and lowering the sails was had in their new roles without the help of the crew; Eden and Ashton in charge of leading the sails. The ship was stowed beautifully for the morning and the sun set below the horizon. A lesson on sailing rules of the road has just finished and soon we will be enjoying a steaming hot dinner of boil up. 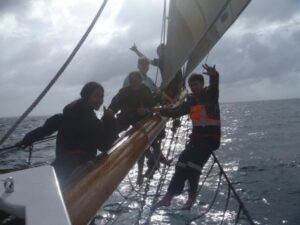 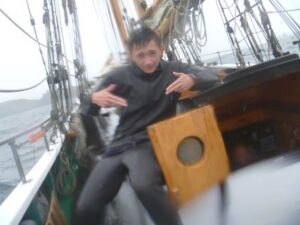 Excited and ready for tomorrow.  Goodnight.