We started the morning off with a 0630 start. Nicanor was first in the water followed by the rest of the trainees. Then it was straight into morning duties, had an amazing breakfast of porridge and baked beans before hoisting the anchor making our way towards the Russell wharf.
The trainees pulled the main, fore and head sails up as we hit large gusts of winds which made a very exciting sail.
On arrival we lowered the sails before coming alongside the wharf.
We had a huge day planned for the trainees. We gathered everyone and headed towards the Pompallier house where we learned much about the first New Zealand publishing press which was created to only publish prayerbooks in Te Reo Maori. They also created many sorts of leather material which was useful in many ways back in the day. On we went towards the Russell Museum where the trainees found out more about the history of the area. After the run back towards the ship, trying to stay dry from the rain, the trainees were welcomed with hot chips and a sausage sizzle. We motored over to Matauwhi to anchor up for lunch.
Once the galley was all cleaned, we blacked out the windows so we could set up a movie called around Cape Horn. During the movie the trainees were lucky enough to have a plate of ice cream each. Many trainees fell asleep during the movie so once the movie was finished we decided it was a good idea to have 30 minutes of silence.
Once everyone gathered enough energy again we were off! We hoisted the anchor and carried on to Roberton Island. Along the way we encountered some excited jumpy dolphins that looked like they had rounded up a ball of fish.
The dolphins carried on along the bay and we lowered our anchor and the tender and headed for the beach. Some of the trainees went for swim while others went for a walk, some hung out on the beach. After enough land time Tor, Jack, Christina, Michelle and Liv all swam back to the ship, Nor and Quinn had some tender practice. Once again we hoisted the anchor and headed to night anchorage in Orokawa. On arrival we enjoyed our last night’s dinner of a scrumptious pork roast which was devoured. We are soon going to gather in the saloon for some group games, we plan on playing a few games of spotlight on the ship before we chill out and enjoy our last night together, we look forward to seeing you guys at 2pm at the Opua wharf tomorrow! 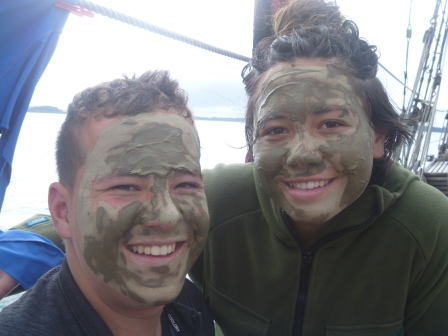