Kia Ora …
Today was the first full day on board the good ship, with our morning mineral spa lead by ours truly Skipper Tim, followed closely by Bayley. Seeing that the water really wasn’t that bad, one by one, the rest jumped in, hot shower had and towels hung out to dry.
Brooklyn, Shaden, Yael and Kelly were given instructions on how to scrub the decks and polish the brass, while Paea, Pene, Hoani, Connor and Bayley doing a great job cleaning below decks.
With breakfast out of the way, we broke into our Port and Starboard teams, and began safe line handling, the different uses of each line and the names of all the sails.
Once we all had a turn at that, Yael, Paea, Kelly and Bayley weighed anchor under the guidance of crew member Alex.
As we cleared the islands, we walked through a MOB (man over board) drill, what to do, what gear to deploy and ways to avoid becoming a MOB. Hoani was the main spotter forward and did a very good job communicating back to Captain Tim, with Bayley, Connor and Pene retrieving all the gear swiftly.
Passing Urupukapuka Bay, we began setting sails so everyone could put their new line handling skills to the test, and we quickly had the Main, Fore and headsails set, great team effort by all.
But the fun doesn’t stop there! All the harnesses were brought up on deck, with everyone having a chance to climb up the four shrouds to the cross trees, and others sitting out on the bowsprit as we made our way towards Mimiwhangata, with a quick stop at Motukokako, giving everyone the opportunity to go through the hole in the rock in the dinghy.
After 4 hours of sailing, climbing and getting a feel of being out on the water on a sweet little tops’l schooner, we stretched our legs ashore on the beautiful soft sandy beach and threw a line in the water off the rocks in hopes of a fish or 2 for tea. 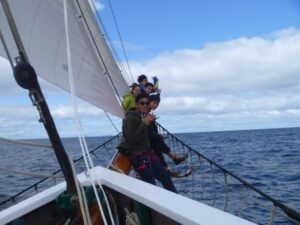