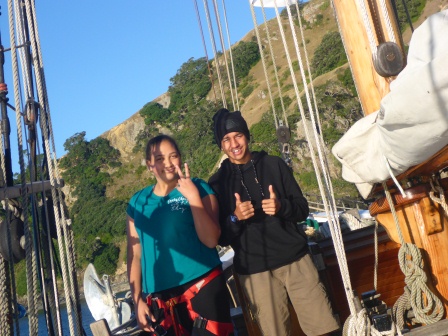 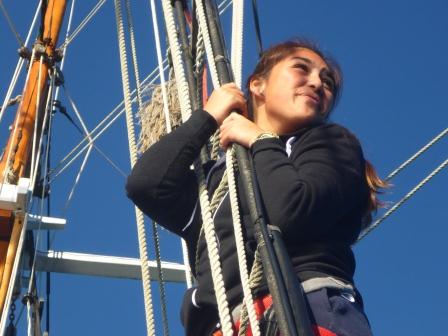 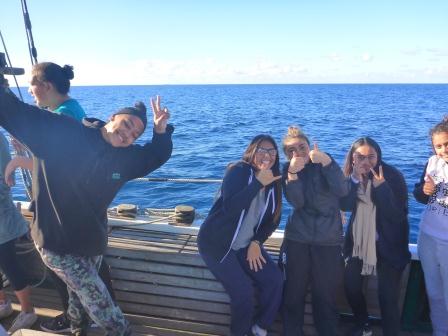 Today was another great day experiencing our beautiful backyard. This morning all enjoyed a sleep in till 0815 (people feeling quiet tired after reaching mid voyage). After swim and duties and while breakfast was being cooked, the trainees had a lesson on Bio-security and the work done by Project Island Song volunteers on the islands here in Ipipiri. It was really relevant as we were invited to be a part of a bird release on the island Motu Rua today. So as breakfast dishes were being done, the ship’s anchor was raised and steered towards Army Bay by Nicola.

Shardonaye was given the responsibility to lead making the packed lunch. Under her good supervision lots of yummy sandwiches were made. Maahina lead the rest of the trainees in getting the other stuff for going ashore ready such as lowering the boat and life-jackets. Anchor down and all ashore we walked over the hill to Mangahawea Bay.Hori took the lead also carrying everyone’s lunch.

The helicopters were a little late arriving with the birds so the time was used to do a beach clean and a beach game called “helium stick”. Back with the other people from Project Island Song the helicopters soon arrived from Hauturu carrying the Kakariki (nataive parrot) first of their species to be re-released on the island. Maahina, Brittany, Nicola, Forest, Hori, and Blue were lucky to get the honour of opening some of the boxes the release them out into the forest.  What a sight! Welcome back to the Island Kakariki!! Then we said goodbye and carried on around the island track, circumnavigating the island all the way back to Army Bay.

The walk was a challenge for some, not used to hiking but worth the walk agreed by all. Back on the ship we had 30 mins of quiet time and rest (we forgot about it yesterday!). Then the trainees applied their skill and decided a safe place to go for the night. Then Hori, Forest and Brittany lead the sails going up and Blue took the wheel. Everyone helping out to get sailing. Sailing into the setting sun we enjoyed the last of the day. Nalani took the wheel for a while too. Maahina and Forest went out on the bowsprit.

Now we are anchored in Paroa Bay for the night, Dinner was hot and Yummy! Spaghetti Bolognese. I can hear the ukulele being playing and singing up on deck by trainees. From all of us good night!