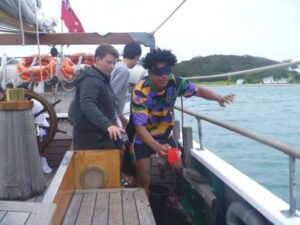 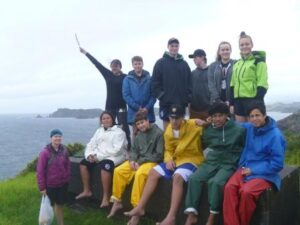 This morning we awoke to a grey sky but all leaped in the water for our daily swim. After breakfast duties and we went ashore onto Motu Rua Island to take in the forest and hopefully see some birdlife on the island sanctuaries. Ramai learned how to drive the out board dingy with captain close at hand to bring everyone to shore. Everyone took the walk over the hill in stride as we descended into Homestead Bay, seeing kiwi poos on the grass path. Over another hill to the next beach, Army Bay, we saw Tui and Fantail on the way. Dietrich and Aaron even saw some Tieke (Saddlebacks). On each beach we picked up any rubbish we saw, taking it back to the ship to be recycled or thrown away. Finally we climbed up to an old WW2 lookout bunker on top of the hill and looked out on the sea and the looming skies gathering towards us. On the way back to the ship, Liam to the lead, and we had our quiet time in the forest taking in the sounds. This time Kommrad had a turn at driving the outboard under watchful eyes and brought everyone back to the ship.

With unpleasant weather coming, Monet, Spiritual and Te Morehu and Sabastain help bring up the anchor and Hunter took the helm as the captain decided to move to a better anchorage. Half an hour later anchored in Orokawa Bay we had homemade pizzas for lunch!! Yummy! Then a game between the Port and Starboard watches were teams had to take turns guiding a blindfolded teammate to deliver cups of seawater to their teams bucket. Rangi was a most gallantly competitive.  After ten minutes, much excitement, several guiding techniques and not too many bruises, it was an exact tie between the watches.

As the rain began to fall, we broke into 3 groups to rotate through classes learning about Fishing Regulations, Biosecurity on the Islands and Rules of boating including how to understand Buoys and Beacons. During this time Janna had been busy in the galley creating amazing smells. Fresh, hot cookies and hot chocolate was ready to enjoy after lessons.

It’s early still now, but as I write trainees and crew are playing a group card game of “mafia” lead by Aaron (currently Monet is trying to defend herself in the game). Dinner is cooking and we are warm and dry below decks. Planning our journey for tomorrow comes tonight drawing our fifth day to an end.