We started the day with an amazing sleep in that all the trainees were ecstatic about. After their tiring 7km walk the day before they deserved it!
Because of the late morning start, instead of the normal morning swim, we headed straight into morning duties which were followed by a scrumptious breakfast of eggs and spaghetti.
We hoisted anchor and set both the main and fore sail, there wasn’t much wind today so there was no use for the headsails. A slight sea swell approached as we left the Whangaroa harbour which some trainees took advantage of and climbed on the bowsprit for some fun.
We set a course towards Paradise Bay on Urupukapuka Island. Along the way we came across a sea riddled in penguins and even a seal!
Alice, James and Nikora had goes at taking the helm for the trip south.
A lunch of curried rice was later served which everyone devoured. Many songs were sung along the trip back into the bay.
Everyone had a quick class on Bio security before we approached Paradise Bay. We then dropped the sails, lowered the anchor and launched the tender.
It was an afternoon of games on the beach, and for others there was time to chill out and make sandcastles. Nikora, Pearl and Tasman all had lessons on driving the tender.
Once we arrived back on the Tucker there was hot chocolates and ginger slice for everyone, made by Rebecca.
Everyone enjoyed a nice swim, some tried to free dive down to the sea bed which was unsuccessful while others played on the rope swing.
During the trainees swim, some took this opportunity to have a row on Lil Tuc. The trainees were able to have hot showers after their cold swim.
Before an amazing dinner of spaghetti bolognaise, the trainees gathered around the saloon table for some bonding time and a small amount of class work.
We are now planning the day for tomorrow then the trainees will have some more bonding time before lights out. 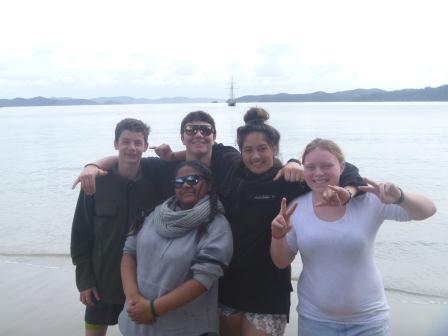