We woke to the beautiful landscape of a calm morning in Whangaroa Harbour today. After our swim, duties and breakfast, a few trainees feeling under the weather so everyone else pitched in to raise sails and head south. Not much wind so we motor-sailed with Nesta at the wheel. Taking turns to stand watch, we had lunch underway, saw penguins, and saw a seal sleeping on the surface. We had to be 3 nautical miles off shore before empting our tanks. James learned how measure the ships distances offshore, which valves to move to open things up and close after. We did a little circle too, to rescued a bucket dropped overboard by Magnus. Dolphins dropped by to say hello as we entered the Bay of Islands. Lorenz and Codie were out on the bowsprit when they arrived and were joined by others to watch. A sea breeze had picked up by then so the engine was turned off.  Grace, Jack and Georgia went up to unfurl the Topsails! Then we sailed into the bay silently. Jack taking the wheel right up until we got to our anchorage at Paradise Bay, Urupukapuka Island. All hands on deck to lower and stow the many sails. Then we anchored. Lorenz made our call to Russell Radio on the VHF radio to notify our arrival. With everything stowed, it was time for a free swim, Mikaira, Grace, Georgia, Matt, and Eloise swam all the way from the ship to the shore, nearly 400 meters! Ethan, Lorenz, Ishmael, Nesta, and Codie followed behind in the tender and for a small excursion on the beach. Kahi is keeping me company as write this. Dinner smells good and the sun is setting on another beautiful day.

P.S.  Ishmael is the man, first to help with everything despite feeling under the weather! 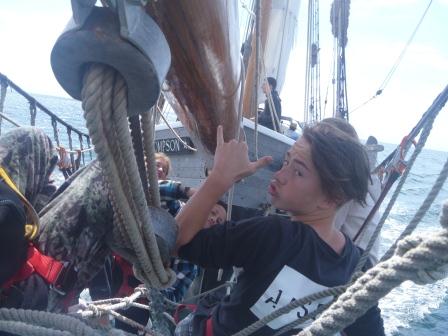