It was an early start to this morning’s routine.
The trainees had a 0600 wake up as we hoisted the anchor and set a course towards the Poor Knights leaving Mimiwhangata bay behind us.
To lure the trainees out of bed we welcomed them with toasty hot chocolates and a beautiful sunrise.
With nothing but blue skies on our travels it took approximately two and a half hours to make it to the poor knights, we begun with launching the tender and taking the trainees through the largest sea cave in the southern hemisphere.
We decided to head around to the eastern side of the poor knights for a swim and to get out of the chilling wind. Skylar was the first trainee to dive into the deep clear waters the poor knights have to offer. She was shortly followed by Ocean, Abby, Grace, Rivkah, Greer, Kayla, Atticus, Tristan.
The trainees saw plenty of beautiful fish and even got up and close with an eagle ray!
After a long adventurous swim we made our way back to the boat and all enjoyed a nice warm shower up on deck.
Then a brief stop in one of the shaded bays for a quick lunch before we motored around the corner into the 20knot winds. The trainees had class underway to pass the time, they refreshed on fishing regulations, weather and rules of the road at sea.
The trainees were able to get a light sleep to catch up on the early morning they had.
Some played cards, others carried on with tag and most decided to spend their last afternoon spending quality time with the friends they have made over this last week.
We are now motoring into Whangarei harbour; everyone’s tummies are ready for the large scrumptious roast we are about to devour for dinner.
The trainees will be spending their last night filling the bay with laughter.
We look forward to seeing you guys tomorrow.
Goodnight! 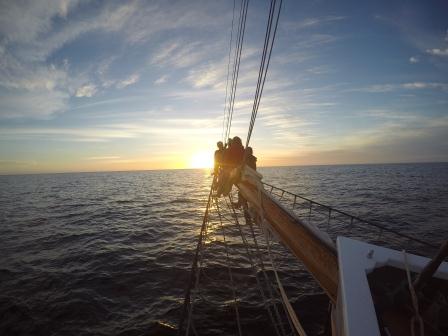