Ahoj from the R. Tucker Thompson. Day one already done and dusted!

Last hugs and goodbyes were had and then we were away, foresail hoisted, heading off into the bay. Number one activity: name games! Then trainees were split into their port and starboard watches and given an orientation of the ship.

After quick detour to Waitangi for the forgotten camera, a lunch of mac’n’cheese was eaten while underway. Then Rivkah, Ocean, Kayla, Atticus and Skylar all went out on the bowsprit to practice their Titanic re-enactments. Arriving at Wai-iti Bay we went ashore for a walk around Moturua Island, learning about Project Island Song and the biosecurity occurring in the bay.

After a nice long walk, some trainees were keen for a swim. Skylar even swam back to the ship from the beach! Atticus, Ocean, Kayla, Greer, Rivkah, Hannah and Tristan tested out the ship’s rope swing.

Once everyone was done swimming, we hoisted anchor and headed in towards Parekura Bay for the night. With the delicious smells of dinner wafting through the ship, we have just got the trainee logbooks out and had a talk about coping with life on board. Card games are being played while we wait for dinner and noise control has been enforced after our eardrums had a blasting. 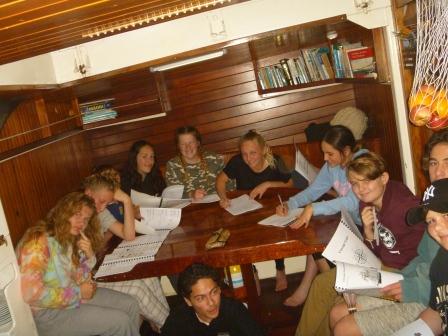