Good evening to those ashore!

We have just dropped anchor in the serene Whangaruru Harbour. All Aboard are well and the evening is has a beautiful golden glow.

We departed Opua today, for the second time for most on board. Returning to the ship to finish their youth voyage that was cut short earlier this year.

Upon leaving harbor a good sailing breeze blew and the Trainees set the Mainsail, Foresail and Headsails. We were able to turn the engine off as we enjoyed lunch on deck blasting our way out of the bay under sail. Frankie took the wheel first while under sail and Tamihana reacquainted himself with the harnesses and climbed aloft. We passed “Shandi” the fishing boat and were visited by “Te Maki” the tourist boat and well as some common dolphins – very briefly!

As we headed around Cape Brett the wind and waves got a bit more intense and the ship reached a speed of 9 knots! Tunisia and Tiaho began to feel not so great in the motion but rallied fast as we rounded the cape into smoother seas. Tunisia and Aneeka headed out on the bow sprit to enjoy the pleasant afternoon and later helped strike and stow the head sails. An afternoon snack of anzac biscuits (no egg!) were enjoyed by all and more baking has been promised for later in the trip.

All hands were called to lower the fore and main just as we approached the harbor entrance. All came together on deck and decided our bedtime for tonight then under the watchful eye of Captain Wayne, the Cadet Tiaho helmed the ship to anchor himself for the first time. Bianca lead the journal writing tonight and much joyful chatter (and maybe mischief too) can be heard from below deck.

We are all excited about the next 4 days exploring done the in hopefully some lovely weather! 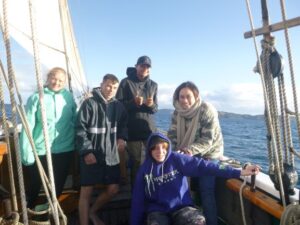