Greta here, writing from the saloon of ‘R.Tucker Thompson’.

Yesterday we flew downwind from Whangarei Heads to Port Fitzroy, Great Barrier Island. It was the dream sail. We left Smuggler’s Cove at dawn, and watched the sun rise over Taranga Island. We saw whales off Hauturu (Little Barrier Island), an albatross, dolphins, a flock of thousands of fluttering shearwaters. The weather was mostly fine -just a little rain. We entered the northern end of Port Fitzroy and tacked into the fresh and flukey wind all the way up to anchor in Smokehouse Bay. This took about an hour but was fun to do. The crew did a run back up the harbour to the shop and explored ashore at Smokehouse.

Today, we got a good breakfast in before raising the anchor and heading out the pass -straight into a gale, bound for Whitianga on the Coromandel Peninsula. It has been a long day motor-sailing into the wind. The sea – Rick says the waves couldn’t keep to themselves, they wanted to come aboard. There was no swell, but very lively waves.  Orca joined us at one stage, more dolphins, and a beautiful black and white Cape Pigeon. By the time we turned into Mercury Bay we were in the area where winds of up to 61 knots were recorded. We were driving straight into 40-plus knots all the way up to Cooks Cove. Wave tops were blown off, and those who stayed above deck were drenched. It was a long day, with very strong winds we were sailing right into, but the fact there was no swell made it an exciting day’s sail. No seasickness. We are now anchored under the white cliffs of Lonely Bay. 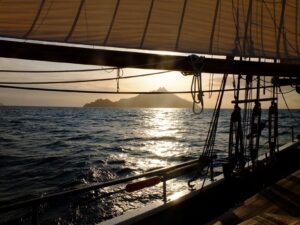