After a warm welcome onto the Tucker, the trainees became rather comfortable with the ship very fast. We completed some games and said our goodbyes before boarding onto the ship and motoring out into the bay for seven days.
The trainees had the opportunity to un-pack their bunks before having a delicious lunch which was shortly followed by the name game.
On arrival to Moturua island we dropped the anchor, launched the tender and headed towards shore. The trainees enjoyed the loop track around the island and were asked to look out for an item that resembled something meaning-full to them so we could discuss it as a group later on to get to know each other a lot more.
We explored the pa site and old army bunker the island had to offer, and had a break in Mangahawea  Bay where we participated in some games- we played Tapu Tapu Rakau and Maui.
Before we headed back to the ship, we sat in a group discussing the items we had found along the way- A lot of them were very interesting. On arrival back to the ship the trainees helped to hoist the tender before we lifted anchor and headed to our night anchorage in Paraenui Bay. We also completed an orientation.
We are now awaiting a delicious dinner of spaghetti Bolognese, the trainees are happily enjoying their free time and getting to know the ship a lot more before lights out.

Have a good night all!

From the team on the good ship. 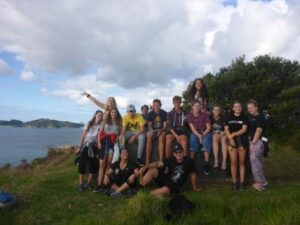