Ahoy from the R tucker Thompson

Another successful day full of learning and laughter

Our morning started and 0700 hrs with a dip in the refreshing ocean shortly after followed duties which consists of scrubbing decks, polishing brass and cleaning down below.

After breakfast we went straight into some lessons while we let the rain pass. We learnt about Rules of the road, buoys and beacons, navigation and passage planning. Everyone took it on very well.

We then raised anchor and made our way deeper into the bay along the way we all participated in a Man over board drill (MOB), everyone did really well and the MOB was recovered within 10 minutes.

Carrying on we made our way to Mangahawaea on Moturua Island. With the anchor laid we had a quick lunch of sausage sizzles, lowered the tender and made our way ashore.

Along our walk we stopped in each bay and learnt about the history of the Island such as the first Polynesian migration back around, Marion Du Fresne who arrived in 1772, Queen Elizabeth who visited in 1953 and some army bunkers from World War 2 in the 1940s

As we made our way back to the start we returned to the ship with a hot chocolate some lemon meringue and apple short cake. After some trainees went for a dive around a reef while others just swam off the ship

Anchor up once again we motored around the corner to Paradise bay where we will be spending the night. We have just enjoyed a delicious dinner of corned beef and are looking forward to the rest of the evening. 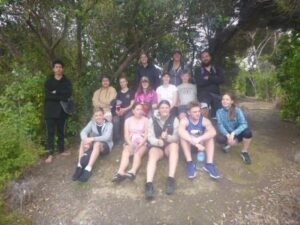