We woke up to a clear brisk morning, and all trainees and crew had a quick dip.

After all the morning duties were done & a great breakfast, a we did a few lessons, while waiting for the breeze to fill in.

With very minimum input from the crew, the trainees weighed anchor and set sails for the open seas!

With the wind now filled in and billowing in a full set of sails we weaved around the islands of the bay, which called for precise navigation from Rene and and concentration on the helm which Dan did with great precision.

After Delicious Pizza for lunch (That Samson helped with) we dropped anchor with almost no assistance from the crew at the beautiful Island of Waewaetorea.

Once sails were furled, Rene, Makayla, Tom and Kayle went for a swim inside the cave on Turtle island, and all trainees spent some time on Waewaetorea to explore the island and stretch their legs.

With Tom taking command again and the officers directing their watches, anchor was again weighed and we set full sail (topsails as well) out into the bay with a beautiful 15knt NE wind on our beam.

A couple of hours later we found shelter for the night in Mangahawea Bay, Motorua Island.

We had a Great feast of roast pork and vegies cooked by our Cpt Terry, which was much appreciated by all the Hungry sailors!

The girls are now making a birthday cake as a surprise for Chynna’s (our first mate) who’s birthday is tomorrow. 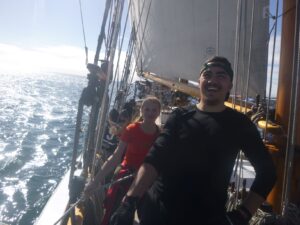