Ahoj again! We send you well wishes from Paradise Bay on our fifth day of the voyage. Today the ship did not move. Instead, everyone went ashore to help the Project Island Song plant trees. So, the usual morning routine was carried out with particular speed in order to get ashore and meet the other volunteers in Urupukapuka bay. With native trees and gifted spades everyone spread out to do the good work; in not one but two different bays. The girls, Maioha, Faye and Catlin worked together with crew member Eloise and  E.J., Cyrus, Chief, and Ryley went the extra mile by helping some older volunteers carry back heavy equipment. After the hard work, we all sat up on the hill overlooking Squid bay and everyone enjoyed a packed lunch of bacon and egg quiche, fruit, and chocolate fish.

It was after lunch that we were told about the history of the work being done the restore the islands in Ipipiri. Faye was familiar with the project already from previous visits. As we walked back to Paradise Bay, Richard (from Project Island Song), attracted some North Island Robbins close so we could see them. We could also hear Saddleback, Tui, Whiteheads, and Silver Eyes. Further down the track he showed us how the check and trap rats and other predators. At the bottom of the track we thanked him for sharing his knowledge and he thanked everyone for helping plant the trees.

Back on the ship, free swim was next. A time for rope swinging and jumping in off the side. Ankit completed his goal of learning to swim round the ship with the help of Chief, Archer, Pierre, and Zayn. Everyone cheered as he finished the last time around without the aid of a lifejacket. The groups energy was renewed with the swim and put to use tidying the ship up. Then Chief’s birthday cake was brought out and enjoyed by all, after of course, he blew out the candles. Happy Birthday Chief!!!

Now the trainees, are sitting down, to play a game of Mafia. Later more lessons will be imparted to them before dinner, bringing us to the end of day 5.

Only two more days till we see family and friends again. 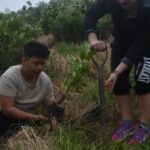 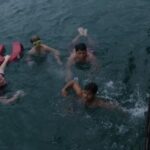 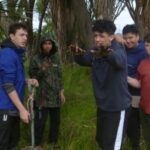