From the Good Ship R.Tucker Thompson, aue.  Apologies for lateness of this but we had a huge day yesterday coming up the coast. We were up and tackling duties having breakfast doing dishes preparing for a big day at sea. Then casting lines from ashore we motored out to the entrance, turning the ship head to wind the trainees had their first touch of line handling as we hoisted the main sail, fore sail and both heads. With flat seas and a fair breeze we set sail for a quick dash about the harbour putting on a show of sails for the locals scattered along the beach in the company of HMB Endeavour and the Spirit of New Zealand. Local vessels laden with photographers circled us as we crossed from Buffalo Beach to Cooks where he did his transit of Mercury , leaving the greater Bay with that name. With the Spirit in attendance we sailed through the Hole in the Wall and Opito Bay. The headsails and main were lowered as the wind came ahead and we motor sailed, tacking to keep close to land and sea choppy. Past Kennedy bay, Tokaroa, Waikawau, Te Anaputa, closing in on the top of Coromandel Peninsula. Moehau above us 1600 hours rounding the top in rough seas, trainees had scattered themselves with the clouds, above and below decks, in bunks and on the bowsprit getting a rodeo of a ride. Then we were into the howling south wester we had hoped would ease. The short lines came out as trainees learn’t some knots and kept hearty with the distant land smudge of Waiheke rising above the horizon. Soon able to set a headsail we increased speed a little nudging towards our anchorage. Then the first bright light in the sky appeared, Venus, then Mars as the day ended the celestial night sky distracted us from our position. Lights on land our next excitement, flashing, steady, lights on hills as we crept in to Man O war bay. Sails doused and stowed, anchor prepared, the chain rushing across the deck as hot chocolates came up, well earned, well deserved. “a quiet sleep and a sweet dream when the long trick is over”

This morning in blustery conditions the trainees went for a swim!!! Showered, duties and breakfast as we prepare for a muster with the fleet and a powhiri at Maraetai. More later. 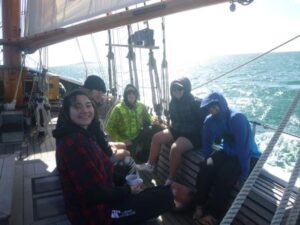