Ahoj friends and family of the Tucker.

Day 2 started off with a splash, Eden being the first in the water for the morning swim. Next, the morning chores were completed- scrubbing the deck, polishing the brass, cleaning the head and mopping the floors. After that we had a big hearty breakfast to give us energy for the activities planned!

After breakfast, we hoisted the anchor, with Ngaroma doing a beautiful job flaking the chain, and trainees learnt more about the sails on the ship and how to use them. We hoisted the sails and headed out into the bay practicing how to tack the ship on the way. The lack of wind did make this slightly difficult though so we kept the engine on and made our way over to an anchorage at Waiwaitorea.

Once the anchor was down, Wiremu, Eden, Ashton, Manaakitia, Walli, Keyah and Erikah went for a snorkel to get some kina but could only find the little ones so they came back to the ship for some curried sausages instead. Meanwhile, down below in the saloon there was Tomas, Taedyn, Mahina and Jon were playing the guitar and having intense card games.

After lunch, everyone went ashore to have their first go at the ’30 minutes of silence’. Then we played some beach games including a sandcastle building competition of which Eden and Manaakitia won- building a sandcastle version of the Tucker herself.

Back on the ship, anchor and sails were hoisted and we headed off for another little sail- this time with more wind so we even got to turn the engine off!

Now we are parked up in Paradise Bay for the night with a yummy chicken dinner in the oven wafting around the ship. 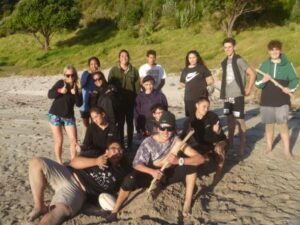