Ahoj, from the Good Ship R.Tucker Thompson, activity central, with a busy last full day. The weather on our side for a swim in the sunshine and duties done. Dishes completed while underway for a kai moana morning.

Wayne with the wetsuit was dropped on the point for a hunt, as we steamed over to the Black Rocks in pursuit of accessible mussels from the tender.  Alex, D’arje, Thomas, Maya, Scott, some with keen hands grasping the barnacle laden lava, while others twisted shells to break the holdfast beards. The swells rose up the vertical face, making it a task to hold the boat in place, grimaces showed on everyone’s face, gather quickly in the calm, the race.

Back on board with half a bucket revealed how testing conditions were, over to the point to pick up Wayne who had preyed on a nice snapper and a couple of crays, mission complete. Not that we were short of food, but a bit of variety is always nice. Mitch has spent the week in the galley producing cakes after meals, and meals after scones, and soup in between and then another cake. Tonight is the big fat pork roast night with cray for entrée, no hard ships here.

After a hearty lunch the trainees were off ashore on Moturoa, a whole new island, games on the beach with everyone participating and then  up the hill to the gun 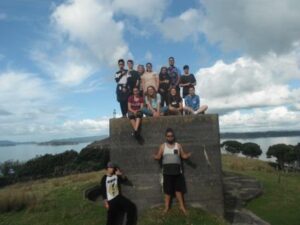 emplacements to enjoy the serenity of the views and 30 minutes silence before a shower burst had them hurtling down the hill for the tender back onboard for a hot cup of soup and buttered bread. Some chill time below decks as we headed for our overnight anchorage in Opunga. Away from the pesky swell which lulls us to sleep each night then wakes us early. Not that we will be sleeping in tomorrow, it’s home day, don’t forget one clock at Opua! We will be up early swimming, packing, munching breakfast before we tackle the task of cleaning the ship and setting sail for Opua. See you all on the dock.