Good evening from all aboard. Day Two of our voyage started at 0730 with a crisp dip into the ocean at Putakokutu all trainees took part in this tradition with some more keen than others!

Next we split into above deck and below deck teams to tidy and clean the ship for the day ahead. Once ship shape we ate a hearty breakfast of spaghetti and eggs on toast. We then gathered on deck to be literally ‘shown the ropes’. With fresh skills in mind it was time to hoist anchor and set out into the bay. We then worked as a team to raise sails and continue our journey on to Urupukapuka Bay.

We ate lunch on deck and then played cards and chess below whilst a shower passed over. Then, making the most of a break in the weather, we went ashore to play beach games and build on getting to know each other. We played the falling backwards game and talked about trust and how we grow trust in each other, we got energised and built on teamwork with Kokopaipai and then led by Paris we played duck duck goose. After our games we split into small teams and had a sandcastle building competition. Favourites were Quintin and Kristins miniature version of the R Tucker Thompson complete with Little Tuc and Chloe and Guys hungry shark.

Before returning to the ship we took 30 minutes of silence to reflect on the previous 2 days. There had been talk of an afternoon swim but when it came to it Ezra and Hemi were the only ones keen to brave the cold and swing out into the water – they jumped out again almost as quickly!

We’re now at anchor for the night at Orokawa Bay, playing cards around the table with our new found friends. 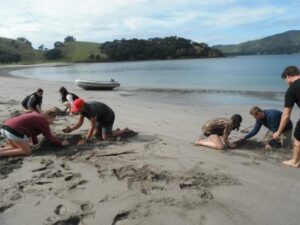