Ahoj friends and family of the R. Tucker!

We welcomed a new set of trainees on today, waving goodbye to friends and whanau as we set the foresail on our way out of Opua, on to the next adventure. After 6 weeks of maintenance the Tucker proudly headed out into the bay once again, with shiny paint on the cap rails and freshly varnished spars.

After the foresail was set, we played a name game around the helm. Then trainees had an orientation through the ship. As we made our way over to Moturua Island trainees learnt how to use the ship harnesses, with Croatia and Douglas climbing up the mast while Moata, Nathaniel and Jacob went out on the bowsprit.

With the anchor down at Homestead Bay we had some lunch to fuel us up for the island walk. After lunch everyone went ashore in the dingy and we played a few games before we began our walk around the island. Croatia boosted up the front and Skye regretted not wearing shoes.

After the island loop walk we were back aboard the good ship, hoisting the anchor and heading off for our night anchorage at Pipi Bay. With the anchor down, some were keen on a swim. Kayla was first in the water followed by Douglas, Nathaniel, Jesse, Skye, Moata, Jacob and Paige.

Now the trainees are warming up round the saloon table, playing cards and taking turns on the guitar while the yummy smells of dinner cooking waft around the ship. 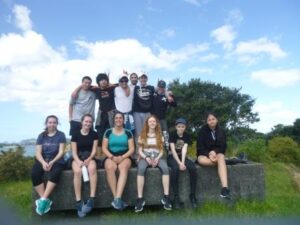