It was a beautiful sunny morning to wake up to.
We completed our morning swim and duties followed by a delicious breakfast.
Helmi, Maxime and Ethan completed the safety officer duties- which included the morning engine checks, while Darius and Lucy got ready on anchor duties which they completed amazingly.
Once the anchor was hoisted we set a course towards Roberton Island which Ethan safely navigated us to. On arrival we dropped the anchor and launched the tender and headed for the shore while one of the crew stayed behind and organised morning tea and lunch.
Jazmin, Lucie, Rebbecca and Lillian enjoyed sunbathing on the beach, while Maxima, Giora, Winni, Malindi, Darius, Flo, Helmi, Ethan went for a snorkel in the beautiful lagoon the island has to offer.
Back on board, we launched Lil Tuck, and the trainees had the opportunity to go for a row. Jazmin and Lucie went together, followed by Maxime and Giora.
Then morning tea of Hot cross buns and hot chocolate was served which everyone happily enjoyed.
Shortly after it was time for lunch. The trainees devoured the scones and soup that were served.
The wind began to pick up and we decided it was a good idea to go for a lovely afternoon sail. Ethan once again navigated a course towards Urupukapuka bay while Jazmin held the helm.
Along the way we had classes on knots. On arrival the trainees had the opportunity for free time. Some chose to go for a swim while others simply chose to sit back and relax.
We completed some classes on tides, weather and phonetic alphabet before deciding to raise the anchor and head to our night time anchorage at Roberton Island.
Shortly we will be having a delicious silverside dinner before heading to the island for an exciting game of spot light. Keep tuned for more exciting activities tomorrow. 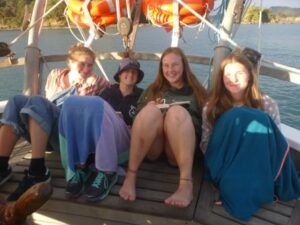