The day began with a beautiful amount of sunshine. The trainees were in the water by 7:45am which was slowly followed by morning duties then a scrumptious breakfast.
After breakfast dishes were completed the trainees enjoyed a lesson on climbing up the rigging or out on the bow sprit, learning how to use their harnesses. Which was followed by some time on little tuck which Joseph, Te Rere, Frankie and Carla enjoyed. Teuila tried to enjoy some time on little tuck but as she tried to enter the boat she accidently fell into the water which we all laughed about including herself. Heni, Grace, Tamihana, Kyarni and Tunisia enjoyed a navigation class down stairs with Captain Wayne. Bianca and Anneka were out on the Bowsprit enjoying the views. This was shortly followed by a lesson on Line handling on deck.
The safety officers completed the engine checks and we turned on the motor, hoisted anchor then began setting our fore sail and head sails.
We set a course for long beach with Hine, Kyarni and Tamihana all taking turns at the helm and the other trainees standing by to tack and gybe.
After a quick crew change at Long Beach,  we set a new course for our night anchorage in Pipi Bay on Moturua Island.
The trainees are now sitting through some lessons while a delicious spaghetti Bolognese dinner is awaiting them.
We have many fun activities awaiting us tomorrow so stay tuned for some more exciting adventures. 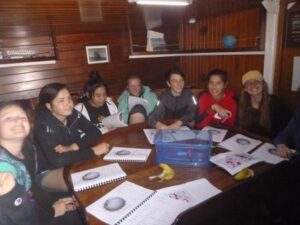