While the sun was slowly shining up on deck, we were all up and ready for the morning swim. Breakfast and morning duties soon followed. When everyone was fed, the ship cleaned, the dishes put away, we moved on with our day. First on the schedule, Class! Today, the trainees learned about rules of the road at sea, and finances.

The weather was mainly sunny, but also slightly colder because of the south westerly winds: ideal conditions for a walk around Urupukapuka. From our anchorage in Paradise Bay, we jumped in the dinghy to go ashore and began our adventure. Frankie, Te rere and Teuila were highly motivated and  walked ahead of the group. With rumbling tummies, we decided to stop in Indigo bay for a well-earned picnic: sandwiches with homemade mayonnaise.

After Lunch, we played a few games, collected seashells and spotted Eagle Rays before heading back to the ship in time before the rain cloud showered the deck.

When the rain stopped, and the sunshine returned we were ready to hoist the sails. All hands on deck! The trainees organized themselves to hoist the foresail almost on their own. Jibs were up, and out we went towards the outer edge of the bay, with South Westerly winds, 15 to 20 kts.

Later in the afternoon, we returned to the islands, and anchored in Motu Arohia, in one of the twin lagoons, to check on our overheating engine. An unusual rise in the thermostat, made us take necessary precautions and requested a tow back into Opua to remedy the situation.

Life onboard ran at its usual rhythm, Corned beef, mash potato and greens in cheese sauce was carefully prepared by the trainees.

Tonight bed time was slightly later than usual, so a complementary hot chocolate was served with marshmallows, while we all sat around the salon table for an open chat about career choices and future opportunities. Once in Opua, we called it a night, brushed our teeth and went to bed. 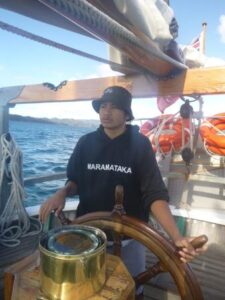