Today’s day started at 6:00am, there was no morning swim as we needed to set sail to Poor Knights. We had breakfast and arrived at Poor Knghts two hours after hoisting anchor.

We lowered the tender into the water and visited the largest sea cave in the southern hemisphere.  This was done in two groups. Everyone then loaded in and the crew took us around the two islands, in and out of caves, over schools of fish and through rock passageways. A small group of seals also presented themselves.

Back on board Rangi and Hine had prepared an amazing morning tea snack of churros. Lunch followed an hour later. Captain took the trainees through a learning session about navigation, pest control, water conservation and the phonetic alphabet. The teams had a few hours to compose their own sea shanty to perform for points. Dinner was corn beef, veggies and mashed potatoes. Bo baked an orange méringue for dessert while Nathan ate egg whites.
Hope you all have a good night, tomorrow plans are to head further south towards Whangarei. 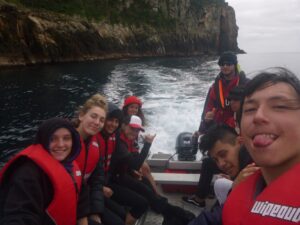