Ahoj from the Good Ship R.Tucker Thompson, a little damp on the water, but settled down at anchor in Pipi Bay off the southern end of Moturua. After leaving the wharf we motored past Russell and left the inner bay with lunch at Tapeka , then the harnesses came out as trainees ventured out onto the bowsprit and the first taste of going aloft. Tearorangi and Kopa were soon on top of the upper yard arm port side and Jess was up the starboard side. Logan and Jacob left the bowsprit to climb as we came to anchor at  Waiwhapuku.  First introduction to getting ashore by tender,  the trainees headed off up the hill to investigate the coastwatch bunkers from World War Two and the loop walk around Moturua Island. Back to the ship as the showers arrived, smiles and chatter as we raise the anchor and head around the corner. A bit more shelter away from the odd swell rolling the ship we get some orientation about the ship, introducing safety equipment and procedures in between isolated showers. The dinner will soon be warming the ship, trainees gathered around the table with cards and more chatter as they introduce themselves to each other and the crew.  A quiet night before we wake in the morning for a swim and see where the wind will take us. 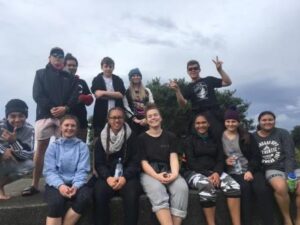